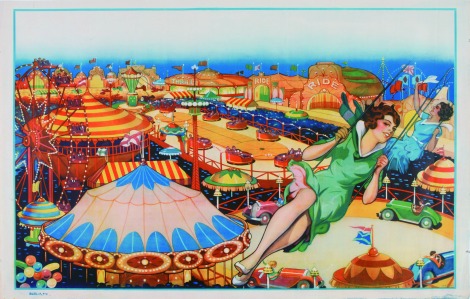 2015 was a fantastic year for documentaries as highlighted in my “Best of” post, but no sooner are we in 2016 and BBC4 decides to add another incredible documentary to their addictive Storyville series.

The Golden Age of Circus combines a few of my favourite things; fascinating archival footage, unbelievable acts of human ingenuity, and Sigur Rós. Director Benedikt Erlingsson has trawled through mountains of old footage depicting the various types of circus acts and those who would attend them. These are arranged into a themed story, each chapter categorised by the type of act (animal, acrobat, stunt, clowns etc) and set it all to an impressive score by Sigor Ros, and it’s chillingly good.

The combination of the footage and the eerie atmospheric music left me absolutely speechless, sat open-mouthed on my sofa in awe of the captivating simplicity of it all. With no dialogue at all, this is a definitive silent film for the modern age.  Those of you who have been to Amsterdam Coffee shops or tweaky East Berlin bars will be aware of just how oddly stimulating vintage clips set to current music is, as they so often have this combination projected onto the walls. It’s difficult not to be taken back by it all, and clocking in at over an hour, it remains fresh and exciting until the very end.

Those apprehensive of watching due to animal cruelty may do well to steer clear of that particular chapter, but the film does little if anything to glamourise or deem it acceptable. The music shifts in tone with each chapter, simply providing a platform for the clips to exist, reaching a dizzying frenzy during the dancing numbers, and unsettling bleakness during the animal routines.

Only 2 months into the year and this is going to be a hard documentary to beat, although when the clips are assembled like this, you could question whether this classifies as a documentary at all. It appears more as an individuals interpretation of the circus rather than a factual representation. Nevertheless, a tremendous amount of skill and effort has gone into this, and it’s staggering viewing. Words can hardly do justice to what you see on-screen, and to describe it any further would remove the feeling you get when you witness the impossible feats and circus “freaks” for the first time. Set aside some time, and step right up to The Golden Age of Circus.

The Golden Age of Circus is available on BBC iPlayer for 4 more days.