Kornél Mundruczó’s Budapest set thriller, White God, is simply jaw-dropping. A strange cross between Homeward Bound and Hitchcock’s The Birds, it uses 274 dogs in total (most of which were found in animal shelters) to convey absolute disorder and mayhem as a dog called “Hagen” attempts to reunite itself with his owner. It is brash, different and a unique viewing experience, with a powerful metaphor at its core.

Hagen’s story is a hard one to watch. A dog living happily with his adoring owner, 13-year-old named Lili (Zsofia Psotta), only to have it all taken away. Their entire world gets turned upside down when forced to live with Lili’s father (Sandor Zsoter) for a few months as he begrudgingly takes extended custody of his own child. He doesn’t want the dog, he doesn’t want to pay the tax associated with keeping the dog, and has no apparent interest in his daughters’ happiness. The dog is disowned, and our characters are left to carry out their lives without each other.

Quite why the dad has this miserable outlook on life, we never really know. It could be due to any number of life’s depressing elements, or something more specific hinted at through the early stages of the story (divorce, unrewarding job etc). His frustration with life appears as an apparent lack of caring, when I think deep down this is a case of misplaced anger, forcing his depression onto aspects of his life he actually has control over.

Hagen roams Budapest ending up in a multitude of unfavourable situations, and all the while we never know his thoughts. There are no dubbed voices, no CGI making him talk; incredibly all we need is a glance from this dog, contextualised within the broader sense of the film to know exactly how he must be feeling at this particular moment in time. Lili leads a similar simultaneous storyline, saying very little, but her silence speaks volumes for the pain she is enduring. We have all experienced loss, and to sympathise with her is effortless.

To delve deeper into what Hagen experiences would give away the core thrill of the movie, but what stands out is quite how remarkable an accomplishment these scenes are. It’s hard to believe there was no animal cruelty involved, but we have been assured the gripping scenarios were carried out through a clever combination of voice actors, animal trainers and precise editing. The shock value that comes with this level of authenticity provides an unparalleled layer of intensity on-screen, one that is not easily replicated and one that surpassed all my expectations.

Aside from being aesthetically spectacular, the film uses classical music to further emphasise the grandiose nature of this tale. However, while it’s grand in terms of presentation, its message is relatively simple; A traditional story of good vs. evil, dictated to us by who is nice to dogs and who isn’t. The White God in this sense is “us”, the humans, able to create a world in which the dogs live in and remove it as quickly as it was built. As a metaphor, it speaks for the way in which lower levels of societies across the world are treated and controlled by those higher up, having their lives determined due to a small piece of legislation, financial penalty, or in some cases out of pure hatred. 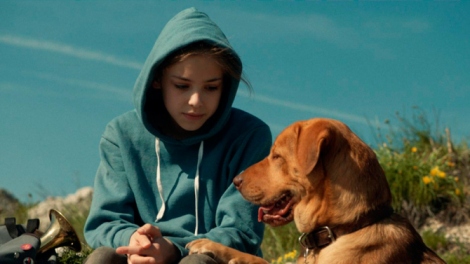 This is much more than a story of reconciliation; it is a story of revenge, one that feels justified and inevitable. The events leading up to the finale are uncompromising in their depiction, entangling you in a web of anger and frustration at those portrayed as evil. This allegorical tale of unfairness is infuriatingly good, imploring you to scream out in support of the less fortunate, and watch in admiration as the unthinkable takes place.

It took me all year to watch this cinematic triumph, almost topped my end of year list, the film poster hangs in my living room, and I now urge you to get onto Netflix and watch this. There’s no excuse not to give these dogs their day.