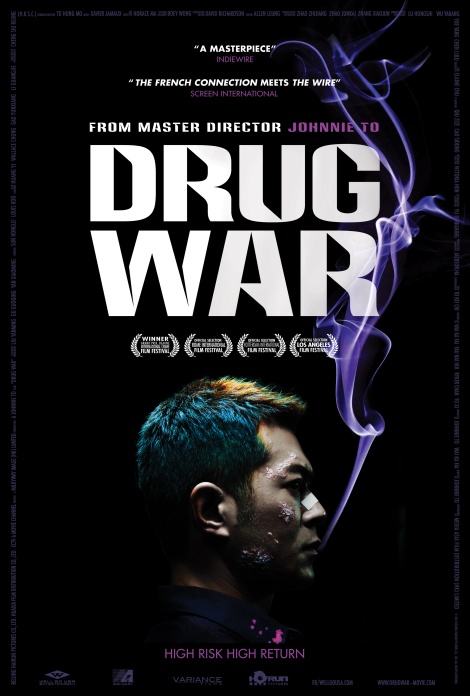 A drug cartel boss who is arrested in a raid is coerced into betraying his former accomplices as part of an undercover operation.

8/10 – The well established Johnnie To (Election, Exiled, Triad Election) finds his feet again with the excellent ‘Drug War’. With over 30 producing/directing credits to his name, the standard of films although well executed have been largely sub-par since the standard was set so high with his earlier work. It is refreshing to see what appears to be a more ‘americanised’ film, one that should relate with western audiences but he has still managed to keep himself grounded in his roots, and make significant reference to harsh Chinese drug policies and the people that consistently disobey them.

The film itself is well shot, the acting is good and not too overly eccentric, and the steady build up reaches a climax with a shoot-out the likes of which I have never seen. Nothing too clever here in terms of the plot, simple and to the point, it is a paint by numbers cop and bad guy film. That being said, there is a lot to take in at the beginning of the film, and it may feel like it is too much. Stick with it for the first 20 minutes and it slowly unravels itself into a beautiful mess. It is a slow building film worth it for the end scene alone. If you like this, check out Election and Triad Election, arguably his best work to date and some of my favourite films to come out of China.