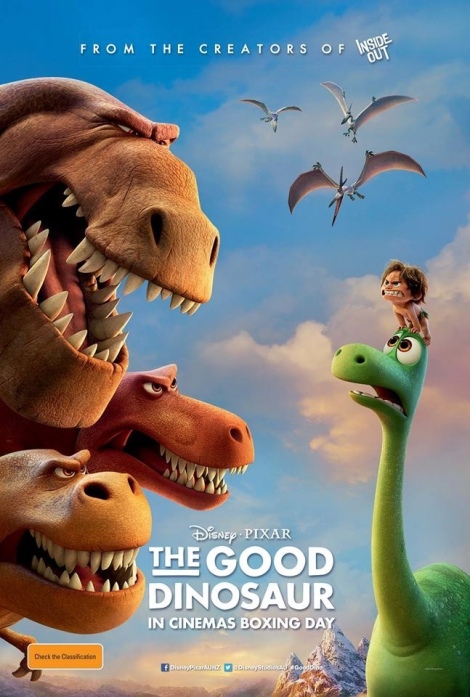 Like the forgotten under-achieving child, Pixar’s second film from 2015 struggled to get out from under the shadow of the behemoth that was Inside Out. It had all the ingredients to succeed, but when the other film is just that damn good, it had to fight for the spotlight. Nevertheless, it did well at the box office, and yet the reviews were luke-warm to say the least, but unlike many of the films in Pixar’s impressive back catalogue, The Good Dinosaur was too one-dimensional to ever transcend the pigeonhole of being just another kids movie.

It tells the story of a young Apatosaurus called Arlo, who gets split up from his family and has to find his way home. Think of it as a dinosaur coming-of-age movie, as he discovers more about himself on this particular journey than he ever would have done remaining at home living his secluded and protected life. It’s set within a period of time that suggests what might have happened if the asteroid had missed earth, and dinosaurs and humans coexisted, and this is shown through Arlo’s companion on this journey – Spot. A small boy with primitive dog like tendencies who is so bizarrely hyper he doesn’t quite seem real, which is strange when compared to a talking dinosaur.

This might actually be Pixar’s best looking film to date when representing an environment that is supposed to have some roots within reality; the landscape and scenery is absolutely spectacular, with a considerable amount of attention to detail where nothing really looks that much out-of-place. Even though Arlo appears more as a cartoon of a dinosaur as opposed to what we would historically visualise them to be, it all comes together nicely, in a well-produced, great sounding piece of work that is very easy on the eye.

So why didn’t it too so well? Well, it’s a kids film with moments of death, no subtle nods to the adults in attendance, and no multiple layers to create anything deep and meaningful to discuss afterwards above and beyond, “don’t be scared”. It has a formulaic story, a predictable message, and a lot of repetition – but don’t let that put you off. As I sat there battling a brutal hangover watching this film, I was still genuinely hooked by the story and events as they unfolded. There were unpredictable moments of immense tension even in spite of the outcome remaining as expected, but overall this tremendous sense of warmth from the bond between Arlo and Spot washed over me.

It’s simple, genuine, wholesome fun, albeit with a straight-forward story, but when it is handled this well and looks this good, we should stop picking it apart and just enjoy it for what it is.