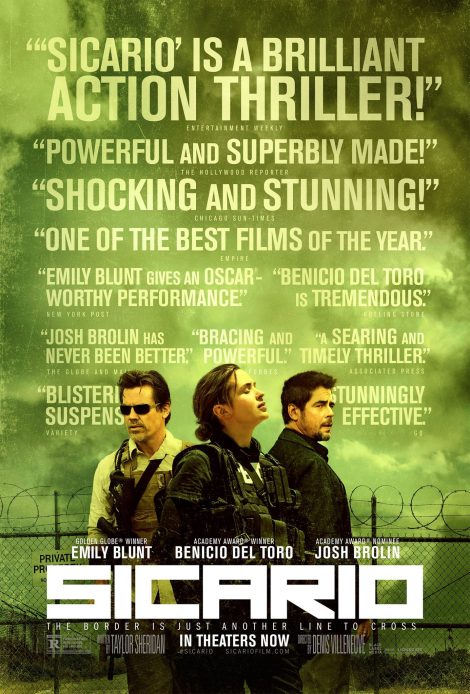 Director Denis Villeneuve is no stranger to suspenseful thrillers. From the criminally overlooked Enemy to 2014’s incredible film Prisoners, he is a master of the art of keeping you on the edge of your seat. His newest film Sicario is no different, it was met with rave reviews, it featured on my many critics top 10 lists and rightfully so. It did extremely well at the box office and only aided the success of other Mexican Drug focussed programming like Narcos.

In Sicario, the US Government goes after the Mexican Drug Cartels by any means necessary, employing some rather suspect individuals to do the dirty work for them. In what is a predominantly English-speaking film, it still manages to get by with minimal dialogue at all. With much of what takes place occurring within a series of covert operations wrapped in secrecy, much of the emotion is conveyed through a single glance. Expertly carried by the performances of Emily Blunt and Benicio del Toro in the two lead roles, this is an intense thriller, with occasional moments of brutality, culminating in a final act that will leave your jaw on the floor.

It does away with the glamourising of crime, the indestructibility of the federal agencies, all of the cheesy one-liners and explosive scenes that cartel movies have been littered with in the past. Instead Villeneuve presents to us an understated, compelling and emotionally draining thriller that ticks all the boxes. This is dirty and uncomfortable to watch, but very impressive given the simplicity of the story.