Last weekend I went and saw The Hateful Eight with the best tickets in the house in wonderful 70mm. While I enjoyed the film, I’m not a Tarentino movie buff, and with all the press this film has received I didn’t want to half ass it. So I didn’t bother at all, and I got someone in who knows what he’s talking about. He’s written once before (review here: I Killed My Mother), and much like before, Matt has no film blog, no twitter, nothing to promote – just his appreciation of this film. Here’s hoping he contributes some more. 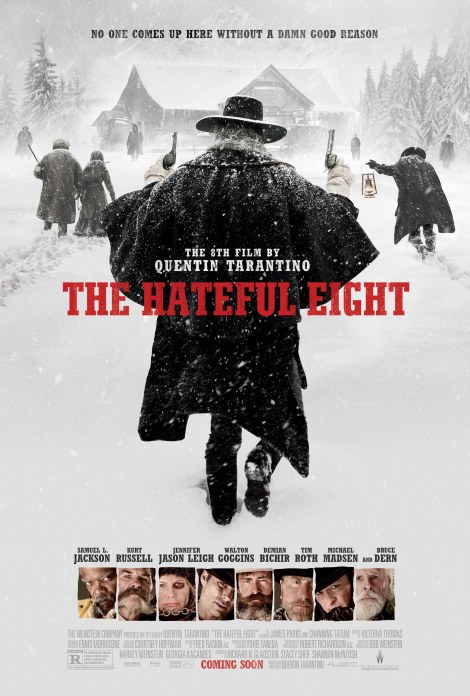 ‘If you’re gonna compare a Hanzo sword, you compare it to every other sword ever made… that wasn’t made by Hattori Hanzo’ ~Budd, Kill Bill Vol. 2

If you’re gonna review a Tarantino film, you compare it to every other film ever made… that was made by Quentin Tarantino. Tarantino films stand alone. He has many imitators, but all of his films, bar none, share common DNA. They are extremely wordy (wickedly funny, profanity laden), extremely violent (beautifully aestheticised), and have plots centred around themes of revenge and retribution. In 14 years Tarantino has deployed this formula across five genres: crime, kung fu, war, B-movie, and with his last two films, the western. However, all of his films share more in common with each other than they do with other films of their respective genres.

So how then does The Hateful Eight stand up to the director’s seven films before it? Well, visually and sonically it is arguably superior to anything Tarantino has done before. Ennio Morriconne’s first original film score in 34 years and Robert Richardson ‘s cinematography give the film a rich, grandiose feel throughout. Shown on Panavision projectors from 70mm print in the way the director intended, the imagery is sumptuous and the detail is startling.

The story reads like a stage play – eight strangers holed up in a room during a blizzard, armed with guns and dubious back stories. It’s a masterful exhibition of tension, which simmers through the first half of the film and boils over dramatically in the second.

The Hateful Eight finds Tarantino at his most verbose yet, and though the dialogue for the most part is as sharp as a Hanzo sword, much of its impact is wasted on its unsavoury characters. There’s no Jules Winnfield, Django Freeman or Beatrix Kiddo here – no moral compass, few redeeming features. After all the wrangling, posturing and double-crossing we’re hard pushed to care which and how many of the eight meet their end in an inevitably elaborate and bloody fashion.

The Hateful Eight certainly has all of the ingredients to be a classic, but Tarantino uses too many of his 167 minutes indulging himself in smart talk and camera trickery, and not enough in humanising the characters. It’s because of this that The Hateful Eight is ultimately Tarantino’s least rewarding film since Death Proof. That said, if you insist on comparing it to other films not made by Tarantino, it’s one of the most visceral, compelling, and bleakest films you’ll see all year