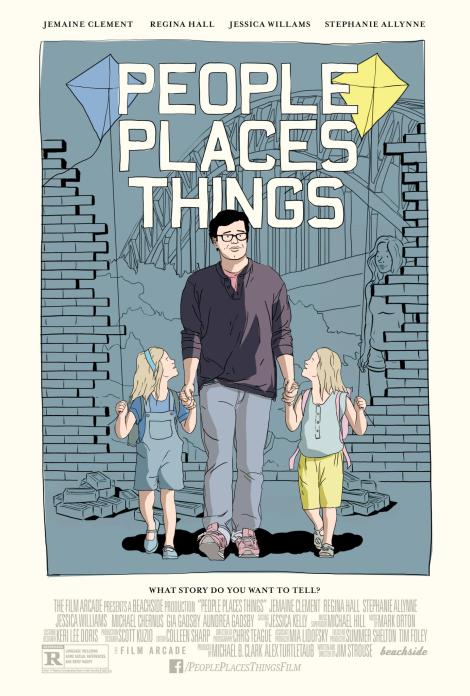 Ever since the end of Flight of the Conchords, fans have been anticipating anything that has either of the duo hit the screen. For Bret, we have hardly seen/heard him except for his award-winning musical numbers in The Muppet Movies, but as for Jermaine, he has been littered across our screens over the last 6 years taking up roles in the likes of Gentleman Broncos, Men in Black 3 and the excellent What We Do In The Shadows.

Now, it is his turn to take centre stage as he plays the lead in the charming film, People Places Things. Clement is Will Henry, an art teacher with a passion for comics, and a father of two adorable twin girls. His life takes an unexpected turn on the girls 5th birthday, leaving him a miserable mess with the only joyous moments being that of when he spends time with his daughters.

He strikes up one of those out of class friendships between a teacher and a student (Jessica Williams) that you really only see in films, one that would probably be called into question in reality because of how cynical we are as a society. She genuinely wants to see him happy and persuades him to meet her mother (Regina Hall), and we spend the film following Will as he attempts to find stability in his life.

Written and directed by James Strouse, this takes on the usual traits of your mumbly indie comedy. Filled with clichés, understated performances and a dialogue that is equal part touching and funny; it’s an accessible film for a wide-reaching audience. Although based in a realistic scenario, it steps away from the intensity of making something too real, and by providing comic relief in form of the awkward but sympathetic (sometimes just pathetic) Jermaine not to dissimilar from the comedic style found in Louie.

Showing shades of his times as part of New Zealand’s fifth most popular folk parody duo, this seems effortless for Jermaine, and much like the video where they made the hit charity single “Feel Inside (and stuff like that)”, he seems to be having genuine fun with it all, especially in the scenes with his on-screen daughters. Above all else, it’s honest and ultimately quite intimate in its portrayal of a struggling man in the midst of a personal crisis. It continues to charm, it’s witty and however clichéd, the story feels like it has a purpose.

Surprisingly uplifting, it’s the perfect movie to stick on when you want nothing too far at either end of the spectrum.