In recent years we have seen many films attempt to change the perceptions of what is traditionally considered to be a romantic comedy, blurring the lines between comedy, drama and romance in ways that have felt original and fresh. Outside of Bridesmaids, you have Obvious Child, in which Jenny Slate had a widely successful pro-choice comedy film based around her characters liberal romantic exploits, Celeste & Jesse Forever finds humour in a unique but classic break-up scenario, Enough Said shows that crudeness isn’t needed when trying to make relationship movies humble and funny, and the mumbly Drinking Buddies shone a light on temptation between friends when in a relationship. There are more that could not be listed here for it could turn into simply being a Buzzfeed type of list, but the flip-side to these are the many films that fall into the simple category of being your generic paint-by-numbers romantic comedy that gets bums on seats. Many of which, director of Trainwreck Judd Apatow is directly responsible for.

Trainwreck goes someway to turn the romantic comedy genre on its head from a gender perspective. This is not a film about bro’s who can’t get laid, or women falling hopelessly in love with a hunky dude, and while it is a film about love, the way it gets there is unconventional by romantic comedy movie standards. In reality there is an imbalance of perception and expectation when it comes to gender; if men sleep with many women they are considered to be ‘lads’ and applauded for it, yet if women do same thing they are branded as ‘sluts’. If men drink a lot they are yet again applauded for their ability to consume large quantities of booze, but when women can do the same it’s described as ‘manly’ and ’embarrassing’ for the most part. This has translated onto film to an extent, and Apatow’s depiction of women in romantic comedies is far from favourable, but truthfully, these activities do not define a gender. It is why it is refreshing to meet a character like Amy, who embraces these traits that shouldn’t really be a social taboo, and shoves it in the audiences face so nonchalantly. 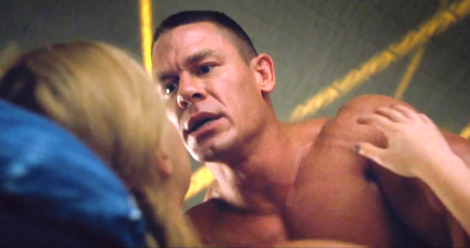 The first half of the film addresses these traits head on, with extremely funny results. Amy cracks jokes at her own expense, at other people’s expense, and like a series of well crafted sketches its quickfire humour hits all the right notes. As she goes from guy to guy, works for a magazine on the same stupidity level as Sugar Ape, takes care of her aging father and looks down on her sisters marital bliss, we see Amy’s character as much more than a superficial, one-dimensional romantic comedy character. Instead she appears as layered individual, who like every normal person has ways to release and cope with her stress. It is relatable, funny and nobody is safe from the quick wit of Schumer’s comedy.

While Schumer is excellent as the commitment-phobic, self-loathing magazine writer, the rest of Trainwreck has an inconsistently used supporting cast. Professional Wrestler (or Sports Entertainer, sorry Vince) John Cena is great in what is his first real movie role outside of the WWE Studios tripe they have him churn out. LeBron James had me in fits of laughter as a weird, over the top, sincere version of himself, and Tilda Swinton is barely recognisable as the abhorrently inappropriate boss of Amy. On the other side of the coin you have Mike Birbiglia who is simply wasted as Amy’s sister’s husband, Jon Glaser (Hilarious Jeremy Jamm from Parks & Rec) as an afterthought in the workplace, and Bill Hader who puts his usual comedy aside in favour of a passive, rational, albeit slightly dull version of what a decent bloke should be. 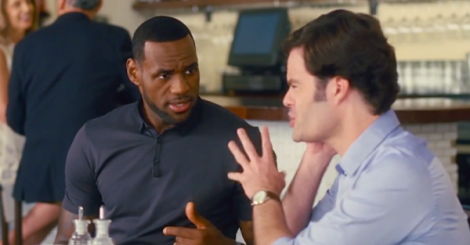 The inconsistent use of the cast is reflective of the movie itself, because while it has its moments, the comedic elements are balanced by long periods of nothingness and bland drama. You sense that Schumer’s type of brash, unhinged, satirical humour has been somewhat downplayed by Apatow, and this potential reluctance to give full creative control results in an all too familiar second half of the film. [Slight spoiler ahead] A consequential dulling down unfortunately has a knock-on effect on the message it initially seemed like it set out to address, with our sexually free, alcohol loving Amy being coerced into changing her ways to conform to the norm in order to achieve true happiness; does this not undermine the marriage hating, opinionated, liberating person we saw, laughed and related to at the beginning of the film? [Spoiler over]

Trainwreck is a step in the right direction for romantic comedies, and proves that the genre still has a lot of life left in it. However much it may feel like a missed opportunity, it reaches a healthy middle ground of being something different yet immensely familiar. Schumer is perhaps not ready for the big screen just yet, Apatow has not fully let go of the typical romantic comedy traits that has garnered his success, but this along with the other movies listed earlier will hopefully encourage others to step outside of the box, be a little bolder and not conform to what is a generic expectation. For all its flaws, Trainwreck is still one of the better mainstream comedies to come out for some time.