Attention! Anyone who recently enjoyed the 30 minute epic that was Kung Fury and longed for more of the same – look no further! Miami Connection is here to blow your mind, take whatever B-movie expectations you had and kick, punch and throw them out of the window.

I’d try to describe the movie, but I read the synopsis on Rotten Tomatoes and it is so on point, if you do not want to watch the movie after this, I do not know what will convince you;

The year is 1987. Motorcycle ninjas tighten their grip on Florida’s narcotics trade, viciously annihilating anyone who dares move in on their turf. Multi-national martial arts rock band Dragon Sound have had enough, and embark on a roundhouse wreck-wave of crime-crushing justice. When not chasing beach bunnies or performing their hit song “Against the Ninja,” Mark (kung-fu master/inspirational speaker Y.K. Kim) and the boys are kicking and chopping at the drug world’s smelliest underbelly. It’ll take every ounce of their blood and courage, but Dragon Sound can’t stop until they’ve completely destroyed the dealers, the drunk bikers, the kill-crazy ninjas, the middle-aged thugs, the “stupid cocaine” 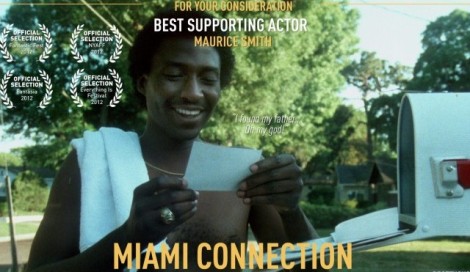 Originally panned in the cinemas due to a series of negative reviews by nasty critics, this movie that nearly bankrupted actor/producer/writer Y.K. Kim almost went into the dark depths of the VHS underworld never to be discovered again. Thankfully, some kind soul found the VHS for $50 on eBay, handed it to Drafthouse and after some hard work on their part, a full restoration, redistribution and subsequent cult following has emerged as a result.

Many films these days circulate and gain popularity on the premise that “it’s so bad it’s good“; looking at the rise of Sci-Fi movies like ‘Sharknado’, ‘Megashark vs Giant Octopus’ and other “bad movies” like ‘The Room’. While it’s great that Miami Connection has found the same pocket of enthusiasm, this film sets itself apart in that it is an unbelievable amount of fun. Above all, it’s not that bad.

If you really look at the clunky dialogue, the first-time acting, the strangely choreographed fight scenes, inappropriately timed and seemingly irrelevant musical numbers that describe plot points before they have happened, and a story-line which barely hangs together – then yes, it could be considered ‘bad’ by conventional standards. But if you embrace these elements; laugh, sing, punch and dance along with it, then you will become immersed in the B-Movie greatness that is Miami Connection.

Sure, we could sit here and sneer at how bad parts of it was, but who benefits from that? For too long we look at movies of this standard in black and white terms, and equate bad quality to a bad movie. We find joy in the weirdest of places, and we should be able to see beyond the quality and not take everything so seriously. It’s not like they had a huge budget, or highly credible actors – it was never going to be on the scale of the other movies released the same year (Robocop, Predator and Lethal Weapon for example). It is an inadvertently funny, ridiculous yet deadly serious time capsule of all things popular in the late 80s – perhaps this is now why we are able to look back and find the humour in it, as it’s easy to scoff at it some 27 years later.

Regardless of how you find the humour, happiness or fun, you really won’t be disappointed when viewing Miami Connection. Watch this back to back with Kung Fury much like the recent Prince Charles Cinema screening, listen to “Against The Ninja” over and over again – get it as your ringtone, as your alarm, then go out into the world and feel ready to take on bad guys, drug cartels, ninjas, stupid cocaine and Hitler.