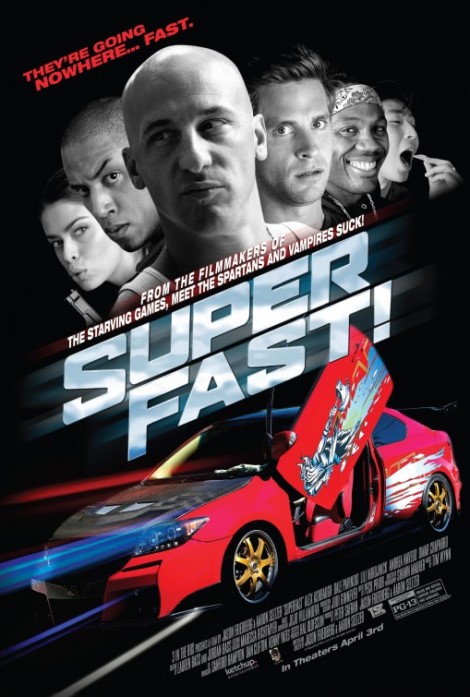 I really don’t know what possessed me to watch this film. Having only recently seen all the Fast and Furious films, a parody of it by the directors who you can hold accountable for such atrocities as “Meet The Spartans” and “The Starving Games” hardly seems like it would make it to the top of my “need-to-watch” list. Although, I felt strangely compelled to at least give it a go in the faint hope that perhaps this would be some sort overlooked comedy gem, disregarded due to reputation alone.

It was not good, however it did have its strengths. The impersonations of needlessly complicated planner Vin Diesel and baby oil pouring version of The Rock were spot on, some of the references to the movies were subtle and worked while the sheer stupidity of the other gags left me baffled yet mildly entertained. Despite the strong start, this is where my appreciation of the movie stops.

While I am ashamed to say that some parts of it had me laughing, fundamentally it wasn’t very clever and it didn’t bring anything new to the table. As with most movies like this, it all gets a bit stale and predictable. The Paul Walker character was portrayed as an absolute moron, other supporting cast members creatively called names like “Cool Asian Guy” and “Rapper Cameo” as if to take a hilarious dig at… well, I don’t know why that is meant to be funny. Vin Diesels girlfriend is  a closet lesbian with no real explanation, as if that alone is supposed to be excruciatingly funny, and “Model Turned Actress” with the other cast members simply exist as their description based names state. They may as well have been cardboard cut outs.

Dragged out for 90 minutes, I completely tuned out of it and this movies now stands as another example of how not to do a parody. A golden opportunity passed up to take the piss out of something so ripe for the picking, instead we are provided with a stupid movie with an over-inflated budget, and jokes that a 5-year-old could have written. The action movie genre itself is a goldmine of funny clichés, and you could have narrowed that down to a specific car based action movie, but this is just a lazy film where aside from a few ‘jokes’ the majority has been lifted from the original films.

Someone, somewhere will like this film, but those with half a brain will look elsewhere and avoid this one altogether.