Les Hommes Libres (Free Men) stars the excellent Tahar Rahim (A Prophet) as an Algerian immigrant, living in Paris dabbling on the black market, who unwillingly becomes an informant for the police. It takes place across the early 1940’s as the Nazi’s continue their expanding occupation of Europe, focusing on Rahim’s character, and his friendship with a rescued Jewish Algerian night-club singer.

This slow-burning drama lacks the tenacity to become a serious thriller, instead it maintains an intellectually stimulating course, never really being able to convey the tension that was no doubt experienced at the time. As the Press Kit details, it was based on true events, contains real individuals, but is above all a fictional tale, and director Ismaël Ferroukhi has clearly done his research in order to make this as realistic as possible. However, you can’t help but wonder that perhaps the focus on the realism and historical authenticity, while trying to balance the introduction of a fictional central character has come at the cost of the entertainment value. Films that are based on true events immediately set themselves a challenging task, but this time the true story was simply compelling enough to be told as it is. 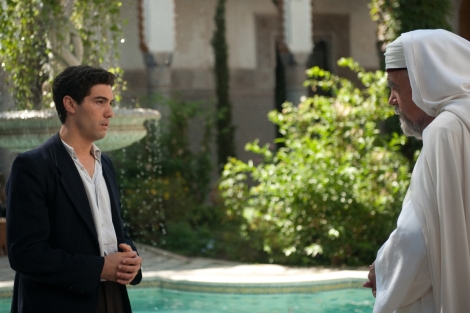 It is an important area of the war that is often over-looked, a gap in the bigger picture that Ferroukhi and writer Alain-Michel Blanc felt needed to be told, and for that reason alone it served its purpose. Anyone with an interest in Muslim/Jewish relations, French History or WW2 should find this film an interesting viewing, but it is no more than that unfortunately. Those seeking the unpredictability and excitement you find in many wartime dramas will be left disappointed. I wanted to like it, but I was left wanting something beyond that of a fictional character coming to terms with his own political mindset, even if it was another incredibly convincing performance from Tahar Rahim.