I had been holding off writing a review of The New Girlfriend for a while now, because I don’t think I can do it justice. This will surely rank as one of the top films of the year for me and I didn’t want to do it a disservice. I’m not a professional film critic, I hadn’t even heard of François Ozon until my friend asked me to come and see this film. The first film of his I had seen was the excellent ‘Swimming Pool‘ and that was only in preparation for this. I’m uneducated and unfamiliar with Ozon’s style, but there’s something very endearing about his work. You feel smarter for watching it – it’s accessible and sophisticated cinema. 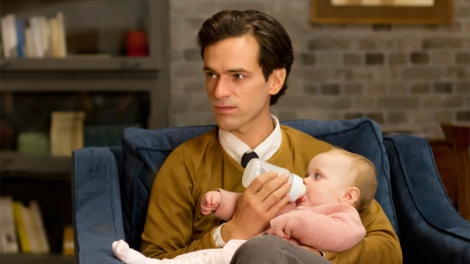 The New Girlfriend tells the story of Claire (Anaïs Demoustier) and the widow of her best friend, David (Romain Duris). The death is covered fairly early on in the film, Claire is at a loss of what to do and David has not been seen for a while. When Claire finally plucks up the courage to check in on the grieving husband and their now motherless child, a friendship post-death is forged for reasons I’d rather not go into – the key component of the story was kept a surprise for me and I hope it remains a surprise for you. It’s not what you think it would be, but the surprise is worth the wait.

Quite how you’re supposed to react to this revelation, I’m unsure, and will be different from person to person. Is it shocking? Is it odd? Is it funny? Is it completely normal? It draws from all of them, as Claire slowly processes her varied emotions and attempts to make sense of the situation, the audience are allowed the time to process what they have seen too. Ozon doesn’t play into the obvious tropes of turning this into a comedic melodrama, and at its heart it has an underpinning seriousness to the almost playful events that take place. However, it is not without its funny moments. A sharp script rife with quick wit and surreal fantasy sequences make for an unpredictable yet enjoyable ride.

As the story progresses, we are tested in our perceptions of gender, sexuality, grief, relationships and identity. It does not remain with a single theme, a single character or a single issue – this is a complicated situation for all involved and it is handled delicately, with great care and understanding. How this is achieved is through its very natural approach to something perceived to be so different – it has a very human feeling to it, that can be largely credited to the brilliant cinematography and great performances of the central characters. Both of which are immensely brave individuals and it’s quite rare you find characters you can invest in so easily.

It is a suspenseful drama, if not slightly ridiculous at times, but incredibly intimate, fun and clever. The New Girlfriend plays with the audience throughout the entire film, and it only adds to its charm. I’m unfamiliar with Ozon’s other work, or other films that tackle this kind of subject matter, but sometimes it’s best not to know all that much about what you’re going to see. The viewing experience of a film as good as this one becomes heightened, it was unexpected, and I for one cannot wait to seek out more of Ozon’s work.

The New Girlfriend is still showing at the Odeon on Panton Street in London, and possibly a few select cinemas around the UK.