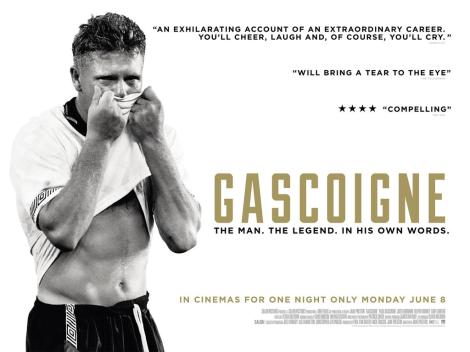 A feature length, theatrical documentary on the life of Paul Gascoigne, one of the greatest footballers that ever lived: delving deep into his psyche, vulnerabilities, fears and triumphs.

Missing out on the chance to see Gazza himself at The Ritzy for fear of him being an incoherent shell of a man and too upsetting to see in person, the release of this documentary to VOD is a welcome sight. Paul, Gazza, Gascoigne – whether you are a fan of football or not, you will be familiar with this football icon. He has been the subject of intense media scrutiny over the years, from his early rise to fame to his eventual fall from grace; it seems a story all too familiar when the media are involved. The thirst for a story about someone else’s enviable lifestyle or subsequent misery sells papers – but at what cost? 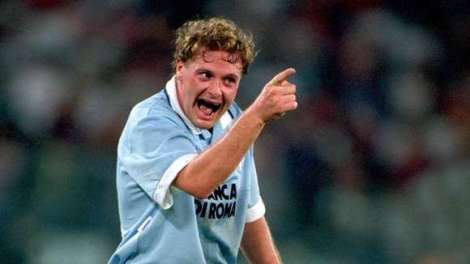 The documentary looks to explore this, but not in as much detail as you would have hoped. It shows how Gazza comes from humble beginnings, experiencing childhood events that you wouldn’t wish on anyone, but seemingly hold no obvious relevance to the footballer we see today. His footballing career charted through broken up goal compilations and showboat reels, twirling and darting his way through everyone in his path. It is incredible to watch, and serves as a great reminder to the unbelievable footballer he once was.

It touches on key events throughout his footballing life; The signing to Newcastle, the incident with Vinnie Jones, moving to Spurs, playing for England, the FA Cup win, his injuries, the move to Lazio and his shenanigans off the field. These are padded out with excerpts from talking heads by the way of Gary Lineker, Jose Mourinho and Wayne Rooney – it makes for lighthearted viewing, and paints a picture beyond the events we just saw on screen. Although, you couldn’t help but wonder, could they have got other people in to talk? Lineker makes sense, but the others? Rooney has never played with him, and Mourinho has never managed him. Seemed strange to just have only these three. Platt? Venables? Pearce? It would have been great to hear from so many others, yet we were stuck with second hand stories from Robson to Mourinho.

Gazza recounts all of these stories with a soft and humble look in his eyes, a man who had no path laid out in front of him and ended up taking a wrong turn. The media whipped his story and personal life up into a frenzy and pushed him to drinking, and being the victim of the hacking scandal only exacerbated the situation. But this section, arguably the most important section of the documentary, a section where we can finally hear from the man himself the side of the story without any distortion, was skimmed over in the last 10-15 minutes with no real further explanation. How did his childhood impact his drinking habits? How much of the money did he spend on the drink? When did it all begin to go wrong? It jumps from playing for Rangers, being dropped from England, to having your phone hacked. What happened in-between?

It is a shame, because while any football fan will clearly enjoy this documentary, what could have elevated this to a universally sympathetic tale would be that of a deeper investigation into the reasons why things ended up the way they did. In the Q&A session in the Ritzy as quoted on their twitter, Gazza was quoted as saying;

“One day they’re gonna crucify someone who’s not as strong as me. I’m lucky I’m strong… They kept knocking me back and I kept getting back up…and I thank you all for being here.”

And yet we barely got to explore that. Perhaps he did not want to delve into it, maybe it was too much for him to do, a mainly positive look back at his career might be the final confidence push he needs to not relapse. Avid football fans will enjoy this documentary; even if you were too young, seeing some context to that World Cup run, the Euro ’96 goal and that free kick, you will find plenty to love. It’s a remarkable story.

However, once the nostalgia wears off, it feels like a missed opportunity. A sitter. Director Jane Preston was through on goal, and she put it wide. Maybe, hopefully, there will be a second leg to pull it back.

Gascoigne is available on VOD