Faced with the absurd competitiveness surrounding his son’s youth league baseball team, Max Morris, a famous comedian, decides to get to know the colorful parents and coaches of the team better in an attempt to find the inspiration for his next movie.

Everyone is an idiot other than me. The slow drivers, the dawdlers on the tube, the people who complain when they’re late but refuse to wake up early and the bloke who sits in-front of my friend at West Ham yelling “where’s the gumption?!”… all idiots, and you probably think I’m an idiot too. It’s this notion that we all believe we are superior to each other that Dealing With Idiots plays on, taking a relatively passionate yet reasonably uninterested father figure who becomes baffled at the vast array of idiocy on display at his kid’s baseball games, and stretching it out for an entire movie.

This self-reflection goes twofold, when the father, Max Morris who is a comedian played by Jeff Garlin (actual comedian), decides to take this idiocy and turn it into a film, within the film. When done right, this type of situation can be hugely successful – you only have to look at a show like Louie, or Mike Birbiglia’s Sleepwalk With Me to realise that the potential is there when a comedian takes the reins of a movie about a comedian. Throw a great supporting cast in the mix with the likes of Bob Odenkirk, J.B. Smoove, Gina Gershon, Fred Willard and Richard Kind and many more, and you would surely be on to a winner. 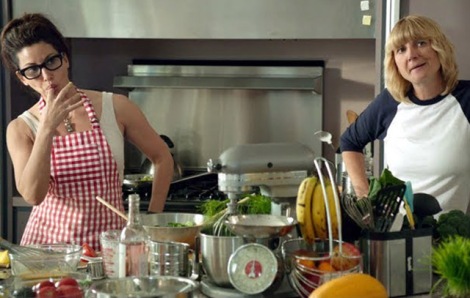 For the most part, you could say it won. It’s a mumbly, somewhat condescending view on these  people’s lives, with moments of brief humour. This isn’t a movie to make you laugh until you wet yourself, I don’t think it set out to do that, but it lends itself to that brand of subtle yet ridiculous improvised humour that takes on realistic situations, and tweaks them slightly to ensure we share the same opinion; that they’re all idiots.

When it isn’t trying to be funny, there are some touching moments that inject an element of seriousness into the proceedings; between coaching his own son, Max also receives parenting advice from his father via flashbacks (Timothy Olymphant). Although these moments are unexpected, it adds a human feel to the film and allows our central character to show that he isn’t just a condescending comedian making a joke at other people’s expense, but that he has good intentions and a depth we would have otherwise not known.

It won’t tick everyone’s boxes, comedy never does. It’s easy to dismiss a comedy film as not being funny in the same way you can dismiss a horror film for not being scary, but both can still offer a lot more and shouldn’t be graded on that one aspect. In my opinion, it was funny in places, but luckily for me, I like that type of inane back and forth chatter that offers nothing more than to really pass time until the next gag. That type of awkward humour when someone puts their foot in it, or when you see witness a conversation so idiotic that it’s not until afterwards you fully appreciate just how stupid it was. For me, this movie hit a home run. I wanted something easy to watch, that didn’t take itself too seriously – you could do a lot worse than this film.

Trailer and the film is on Netflix