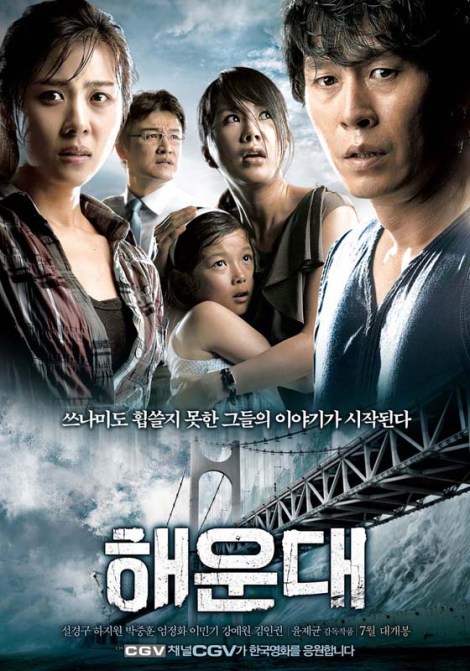 Professor Kim, a marine geologist, recognizes the impending danger of a mega tsunami headed straight for Haeundae, a popular vacation spot on the south coast of Korea. He desperately attempts to warn authorities and alert the unknowing vacationers of the 500 MPH destructive force of nature headed their direction.

Widely recognised and marketed as South Korea’s first disaster film, set on the noticeable location of Haeundae beach, with a strong cast featuring the likes of Sol Kyung-Gu (Public Enemy Franchise), Ha Ji-won and Uhm Jung-hwa, this had all the makings of a South Korean classic. Take a standard genre that has been done to death in the Western world, and mash it up with the character traits of Korean cinema and you would surely be on to a winner? It worked for ‘The Host’ in the sci-fi monster genre, and ‘The Berlin File’ did extremely well within the spy genre – there are many more. By that logic, there should be no reason to doubt that they cannot do the same with the disaster movie genre.

Within the first half of the film I felt like the prediction was right. The stereotypical characters that you come to expect were there from the get-go; cute kids, clumsy oafs and mysterious women, it was a play by play of Korean cinema. Those not familiar with it may become frustrated at how stupid some of the characters are, how immeasurably infatuated the men are with the women, and how the kids hold themselves almost as equals to the adults in many ways. It’s all quite dramatic, but matched with enough humour to keep even the casual viewer entertained.

However, after nearly an hour of enjoyable comedic drama I was left wondering when the wave would finally hit. It was not like I wanted these people to get wiped out by a gigantic wave, I had grown quite fond of them, but a giant wave is what I expected and there was no sign of it. I would have quite happily watched the rest of this movie and have no wave hit them. When the inevitable finally happens, it is pretty devastating. Morbidly drawing on inspiration from the actual tsunami disaster in 2004, it was unflinching in its portrayal. A sea of screaming in a sea of water, and suddenly you just wanted the entire film to be over.

Not because of the CGI, which was was OK, comparable to Sharknado in it’s sci-fi movie-esque appearance, as shipping containers were being launched thousands of feet into the air jamming themselves into nearby hotels as a giant CGI wave hits the city. It boils down to a combination of the interspersed epiphanies shouted by each of our main characters regarding their romantic interests when attempting to avoid the powerful wave of water, which undermine the seriousness of the events taking place. But also the street scenes, away from the CGI, shown with the water pouring into shops, cars and entire crowds of people, that was simply gratuitous and graphic, and unrelated to our central story-lines.

Naturally comparisons to ‘The Impossible’ can be drawn, and while ‘The Impossible’ is a better movie, for all it’s attempts at authenticity Haeundae never really feels like it’s trying to be realistic as noted by the first half. This was my main gripe with the movie, and prevented me from really fully enjoying it. You replicate a tragic event, openly reference it for ‘inspiration’ but turn it into an melodramatic comedy for the most part – it feels a bit off. Similarly, when you finally inject some danger into the movie, you undercut it with romantic bullshit. This was released some 4/5 years after the 2004 Tsunami, and an event like this being turned into film needs to be handled carefully, with a degree of sensitivity. In hindsight it seems a tad exploitative, playing on what were recent events as a way to draw box office figures, and as a result it suffered in becoming a wet mess. Viewers can care for individuals without the need for an hour long setup, give us the initial overview and then treat the danger as actual danger as opposed to a platform to iron out their relationship issues.

Not a bad first outing into the disaster movie genre, but if you reference and imitate an actual disaster, it’s not supposed to be funny.