After a prank goes disastrously wrong, a group of boys are sent to a detention center where they are brutalized; over 10 years later, they get their chance for revenge.

Sleepers was a film recommended to me by numerous people, and it is easy to see why. A great cast starring in a film based on Lorenzo Carcaterra’s best selling true story, it would be difficult to justify why you would not want to watch it – it ticks all the right boxes, for me at least. However, what was not mentioned to me was the content of the film itself. IMDB is misleading in its nonchalance of dropping in the word ‘brutalized’ when describing the events that take place. This could mean any number of horrendous acts, but nothing could quite prepare me for what exactly happened in this film, and for context sake I will provide the first line of the Rotten Tomatoes synopsis to set the tone;

As adolescents, four boys sent to a reformatory were raped and tortured by guards there…

To list any more of their description would give more of the plot away, but had I seen that prior to watching it, I would have prepared myself mentally for what I was about to see. Rewind to the beginning of the film, and we are taken to Hells Kitchen in Manhattan to follow 4 kids, Shakes, Michael, John and Tommy, trying to get by in this poor, working class neighborhood based on what they see to be normal around them. Kids being kids, and with nothing else to do, pranks and scams are a regular occurrence as they look up to the crooks that run the area. Unfortunately, one of these does not go as planned, and they are sent to a young offenders institution. What followed shortly after this was grim, disturbing and stomach churning, as at the hands of Kevin Bacons despicably unpleasant character, a guard called ‘Nokes’, the kids were subjected to horrific acts of sexual abuse.

However, we do not see what goes on, only before and after. I’d compare it to one of the two extremes I have come to encounter in cinema when sexual abuse is involved; Austrian film ‘Michael‘ where do not see anything, but the intent and implication is apparent to the extent I felt nauseous. The other extreme would be ‘Irreversible‘ where an unspeakable sexual act on a woman is committed on screen for all to see, and the same sickening feeling of repulsion is conveyed. The film achieves a compounded feeling of both extremes, by using implication, looming dread and blurred flashbacks to create warped, unsettling scenarios both the viewer and kids want to escape. 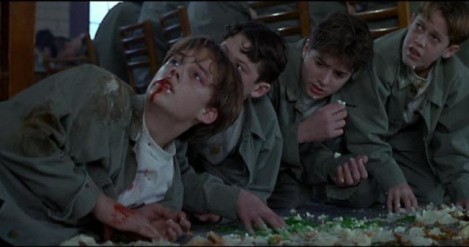 Leaving could not have come quick enough. It lifts us out of the grim existence the kids had known to inhabit, and launches us in the present day, but naturally the past still haunts them and this existence is just slightly less grimmer. It is at this moment we get to see the high profile cast shine; Jason Patric (Shakes) and Brad Pitt (Michael) put in excellent shifts as the older versions of themselves, showing enough vulnerability and anger while maintaining believability.  While Robert De Niro (Father Bobby) and Dustin Hoffman (Danny Snyder) add even further depth to the proceedings, and a touch of quality only experience can provide to the fairly young ensemble cast.

The remaining film plays out in the court room as a consequence of actions taken by the older versions of the kids, but all is not as it seems. At risk of simply describing the film in its entirety, I’ll leave the remaining aspects for your discovery. However, it is at this moment that you could call into the question to what extent these events in the latter section of the film have been sensationalised, or even fabricated. I find it a little hard to believe that what happened, actually happened. Nevertheless, it is thrilling to watch it unfold, and this is one of those situations where you can overlook the truth of the individual tale in order to get a grasp on the wider issues that were present at the time, and appreciate the storytelling techniques being carried out.

The evil acts in the film remain relatively unanswered in terms of motive, and to this day even now we do not know why certain people do the things that they do. But one particular reviewer, a reviewer I have a huge amount of respect for, missed the mark entirely with his interpretation of the film in my opinion. Roger Ebert stated in his thoughts that Sleepers is essentially a “homophobic revenge fantasy“, that dabbles with the notion that the movie implied, “homosexual rape is worse than death” and asks us, “If the boys had been beaten but not sexually molested, would the movie play the same way?“. The movie does not have any homosexual/homophobic tone at all, it this is an awful conclusion to make from such a well renowned reviewer. It is complete nonsense. The film, irrespective of gender, was a horrific portrayal of a failure in both the judicial and society as a whole, and highlights the challenges surrounding child abuse from those in positions of power. Relating Sleepers to a homophobic revenge crusade through the medium of child abuse is inaccurate, a disservice to the film, and offensive to those involved.

Overall, this is an extremely sad movie, one that blurs the lines of what is to be considered right and wrong. From the very beginning we are challenged to take a side, whether it is the side of the kids, or the recipient(s) of their failed prank, our own moral compass is tested. This continues throughout, and while it is explicitly obvious that Kevin Bacon’s characters actions were wrong, does it justify the response it received? Nowhere else is this explored more than through the inner turmoil within De Niro’s character, Father Bobby, as a priest caught between religion, affection, loyalty and conscience, it is captivating and heart wrenching to watch him in this conflicted state. This extends beyond the screen, into the individual viewing experience, in that as you will find yourself embroiled in a conflicting state of anger, confusion and disgust.

Sleepers it is one of the most provocative movies I have endured, regardless of the truth behind the film it handles horrific subject matter tactfully and this takes a tremendous amount of skill. It has its downfalls, but it takes a special film to really make you feel the way this film does. After watching you will need to find a way to shrug it off, I opted for Family Guy followed by Homeward Bound, and still ironically, struggled to sleep.