I am in two minds of promoting this trailer because it’s a film that hardly needs the publicity. However, Tom Six, you have done it, this trailer actually intrigues me…

The first film was supremely bad and many have slated it, including myself, for simply not being any good. For those unfamiliar, The Human Centipede: First Sequence, was the story of two girls who instead of waiting by the car for help, decided to walk into the first house they saw. This house belonged to a Demon Headmaster lookalike (British kids TV reference), who had a portrait of a fetus on his wall and only served the guests water, despite offering them other drinks. After which, he drugged them, and stitched them up ass to mouth to a Japanese tourist, for no reason other than to see if he could. It was sort of funny in a “oh my god I cannot believe this even got made, this is kind of gross” way. Throw in some corny acting, implausibility and you had yourself a fairly solid, but ultimately bad, horror movie.

The second film, ‘Full Sequence’ establishes that the first film was an actual film and not an event that took place, and follows the story of a mentally deranged British man who wants to make his own centipede after watching First Sequence. It is quickly established that First Sequence wasn’t reality, but was a film. A film within a film. This film, shot entirely in black and white, presumably so you cannot distinguish between low-budget imitation shit and blood, is one of the single worst things I have ever seen. As our main character goes from masturbating with sandpaper, to brutalising each of the segments of the centipede in uniquely disgusting ways, and you can take your pick of the scenes that had to be cut, it’s clear that this had no aim other than to be anything more than shock value.

Which brings us to The Human Centipede 3: Final Sequence. A movie that after the abhorrent second one, almost nobody wanted to see. However, Human Centipede regulars Dieter Laser and Laurence R. Harvey play entirely new characters, along with Bill Hutchens and Peter Blankenstein from the previous sequences, it is apparent that this film again will refer to the first one as a film and not actual events. What we can dissect from this trailer is that Tom Six plans on going out with a bang. An entire prison stitched together, ass to mouth, for purposes that this time become somewhat clearer than his previous work. Whereas the first was someone wanting to see if it could be done, the second was some morbid fantasy, this seems to be a means to control the riotous inmates and set an unspeakable deterrent for anyone  looking to commit a crime. There is a method to the madness, even if it involves eating someone’s shit. 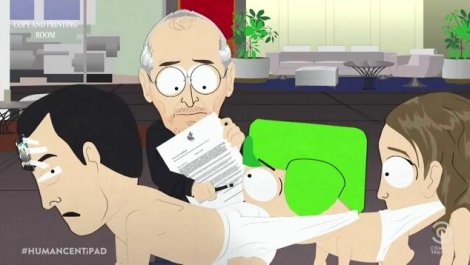 Much like the South Park episode that parodied it, would you click ‘accept’ on the iTunes terms and conditions if you knew this is what you were in for? Would you commit a crime if you knew a 500 person, shit eating monstrosity was on the other side? It looks like HC3 is embracing its ridiculous concept; from the warnings on the trailer to the production value in the film, it comes across as more of a surreal dark comedy than a horror flick. The fact that this is the only remaining option left for the Prison Warden is laughable in itself, and then to see it come to fruition in the picture below has me cackling away at how f*cking stupid it looks. I don’t feel repulsed, this one frame has made me laugh more than the other films combined. While I realise the previous films were not there for comedic purposes, if you are setting out to make a B-movie horror with a silly concept, embrace it and run with it.

Released on VOD and cinemas 22nd May 2015, we will see if it will convert the skeptics. I for one am hopeful that Tom Six pulls it out of the bag, and manages to create something truly disgusting and funny.

Until then, I reserve judgement on Final Sequence, but the first 2 are simply unforgivable.