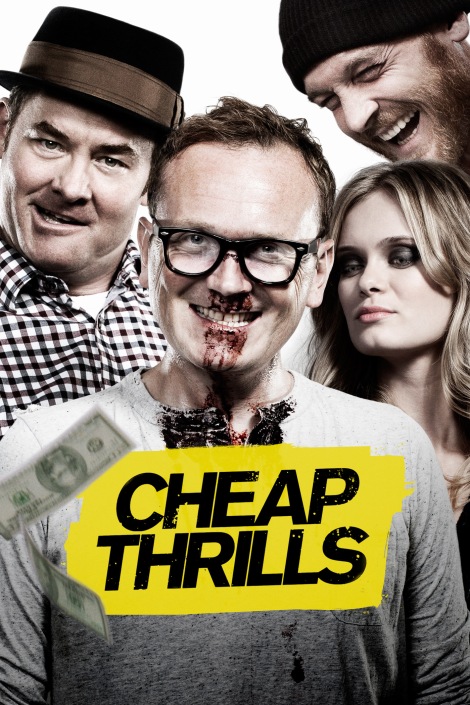 A scheming couple put a struggling family man and his old friend through a series of increasingly twisted dares over the course of an evening at a local bar.

We’ve all been there, sat in the local pub discussing what you would and wouldn’t do for money. In fact, one example I have is where we were sat in the garden of our pub, and the challenge to soil yourself for money was brought up. Of course people started at the top, “a million quid” someone exclaimed, which then began to wind down to an actual value worth exploring, “twenty quid?” they said. With 8 of us there I called them on their claim, and to our collective astonishment they pooed in their pants for £20. What motivated him to actually go through with it, I have no idea – bravado, fear of backtracking, or he just wanted to see if he could go through with it, but the common theme here was money. Everyone has a price, and that is the basis for this movie.

Cheap Thrills is the type of dark comedy horror film the casual horror fans have been calling out for. There is no torture porn in this, for the horror and shock value comes from the winding path of escalation this film takes you on. Pat Healy is Craig, a financially drained individual with a family to support, and it becomes apparent very quickly upon meeting the extremely minted Violet (Sara Paxton) & Colin (David Koechner) that his desperation will lead him to a dark place. Egged on by his reacquainted high school pal Vince (Ethan Embry), the games begin to see who can walk away with the most amount of money.

A simple premise, and one that you think leads to an obvious conclusion. Especially when you view the trailer, a trailer that appears to give away the entire plot and all its associated twists. I can reassure you however, that the trailer only scratches the surface. This low budget movie armed with a small cast manage to establish a jovial tone early on, but once it switches up a notch, the horrific and disturbing acts really test your stomach turning limits. It is extremely clever, the tension at times is unbearable but its ability to teeter between dark comedy and horror while remaining entirely plausible enables this movie to exceed expectation. Enhanced by the grotesque sound effects and vivid yet convincing imagery, it is a formidable movie within this genre.

The similarities here between reality TV are astutely observed, with those at the bottom of the pecking order humiliated for the rich’s amusement. Similarly, you could argue that this battle of rich vs poor extends far beyond Reality TV, and expands to cover society as a whole. Despite leading a good life, and their good intentions, cash will always be king. The desperation associated to obtaining this cash varies from person to person depending on circumstance, and just as some will shit themselves in the pub for £20, others will do much worse for much less.

Cheap Thrills is exactly what this film delivers, and I loved it.