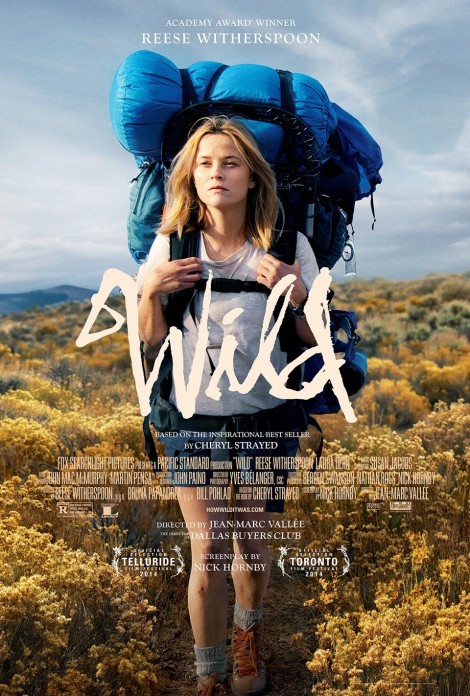 A chronicle of one woman’s 1,100-mile solo hike undertaken as a way to recover from a recent catastrophe.

I finally got round to watching Jean-Marc Vallée’s (Dallas Buyers Club) most recent outing ‘Wild’, based on the memoirs of Cheryl Strayed, and while Reese Witherspoon’s performance is worthy of the recognised Oscar nod, the film is not in the same league as the other contenders.

Similar to the previously reviewed ‘Tracks‘ the film follows a young woman as she decides to escape her life, leave it all behind her and go on a challenging trek in an uncompromising environment. Similar to ‘Tracks’, little happens on the walk itself and for the majority of the trek we are simply treated to lovely scenery. Where it differs, is the way in which ‘Wild’ evolves it’s storytelling techniques, branching out into unconventional methods combining both inner thoughts, memories and flashbacks with present day encounters. It all sounds fairly tried, tested and conventional, but for once this is not spoon-fed to us nor is it predictable. It was certainly different, in a tweaky, nostalgic, hallucinogenic kind of way. This technique really excelled when Witherspoons character began talking out loud in her head, and her interior monologues manifesting into actual spoken conversation with herself. Those that have been on long hikes or treks, will instantly be able to relate – it’s actually a nice feeling, rather than plugging your ears with music, to thrash out a conversation in your own head is a cleansing process. It was captured perfectly, which is no easy task.

While the dangers of an isolated, vulnerable and naive female on a hike were played up at times, there was never any time I felt Cheryl was in danger. Despite every single man she met being portrayed as a potential rapist, I just did not see it playing out that way. Much like ‘Into the Wild’ and ‘Tracks’ there needed to be an emotional investment in the individuals plight – in this instance the peril on this journey started long before the walk began, as the ‘catastrophe’ was a combination of life altering decisions and events that led to her emotional and physical breakdown. As a result, the walk itself is inspiring but dulled down in comparison, perhaps this is down to Nick Hornby’s interpretation of the memoir, but the achievement of walking the distance was underplayed, and the flashbacks frequent but repetitive.

If it were not for Witherspoon under the guidance of Jean-Marc Vallée, this film would have been a self-indulgent snooze-fest with little to offer. Stubborn, determined, aggravated, fragile and underprepared, it comes across in every facial expression, every word she utters and every step she takes on this trek. She injects subtle humour into her role effortlessly, contrasted with the bottom of the barrel scenarios she found herself in prior to the trek, it was captivating to watch and it elevated the basic script to something worth investing in.

Despite that investment, I still lacked any real emotional connection to the film. Good editing, a nostalgic soundtrack and beautiful scenery could not stop the overall film from feeling simple and mediocre. I am sure that is the exact opposite they were going for, when a woman who overcomes many odds walks 1,100 miles solo in the desert and snow, but the message was unclear for the most part. Of course there are literal and metaphorical messages at work, as she puts ‘one foot in front of the other’ on a ‘journey’ of self discovery, but the walk itself was a rather tame affair overall.