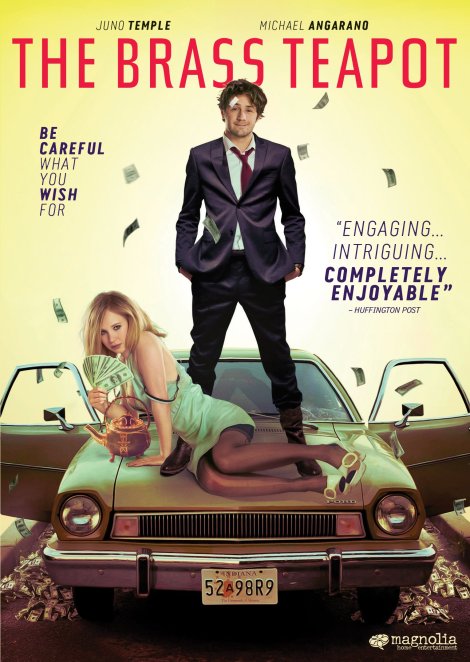 When a couple discovers that a brass teapot makes them money whenever they hurt themselves, they must come to terms with how far they are willing to go.

The premise of people injuring themselves for money is not all that original, look at Jackass and Dirty Sanchez for example – people have been doing it for years. Due to The Brass Teapot being entirely fictional, the concept of getting hurt for money can elevate itself beyond slapstick, cringeworthy humour and take on a much more fantastical view of ‘no pain no gain’.  From Orthadox Jews to redneck no-hopers, and a plethora of different ways to experience pain, this film was always going to be an intriguing watch.

Juno Temple (Killer Joe, Horns, Dirty Girl) was excellent in this film as the disillusioned graduate with a Masters in Art but nowhere to apply her years of work. She greets the screen a certain deviousness and unpredictability which for those who have seen Killer Joe, will know she can pull off so well. Michael Angarano, the real-life partner of Juno Temple, plays the likeable, overqualified dreamer and between the two of them they manage to make the film quite watchable. It comes across as a fresh faced and fun indie comedy with a lot of potential.

It is by no means a perfect film. The script teeters between dark comedy and romantic drama, but it does rely heavily on violence to pad it out. That being said, the violence isn’t slapstick, and there is a method to the madness, however there comes a certain point where enough is enough. The film is expanded from a short story which you can tell, because by the final third of the film, it feels repetitive, drawn out and you suspect that there is no conclusion in sight. Which is a shame because it isn’t that bad overall. If it managed to sustain the momentum it had in the first place, and inject a bit of depth to the proceedings, it could have been something really good.

The film currently holds an unfairly negative scoring on Rotten Tomatoes. While ratings aggregation websites like Rotten Tomatoes are good, it is always worth taking them with a pinch of salt. There is a decent explanation from Drew over at Hitfix as to why the film has been so poorly rated after he was approached directly by a publicist for the film. Whether it was right to beg for positive reviews is neither here nor there, it’s a bold move that should hopefully see it pay off over time if not for this film but for future films by Ramaa Mosley. A limited release, an imbalance of initial bad to good reviews and the fact that quite often critics don’t tend to review films once they have been out for a couple of years have lead this film to plummet in the tomatometer.

It was made on a small budget, with a likeable cast and certainly has it’s moments. Give it a chance, and don’t be put off by the ratings.