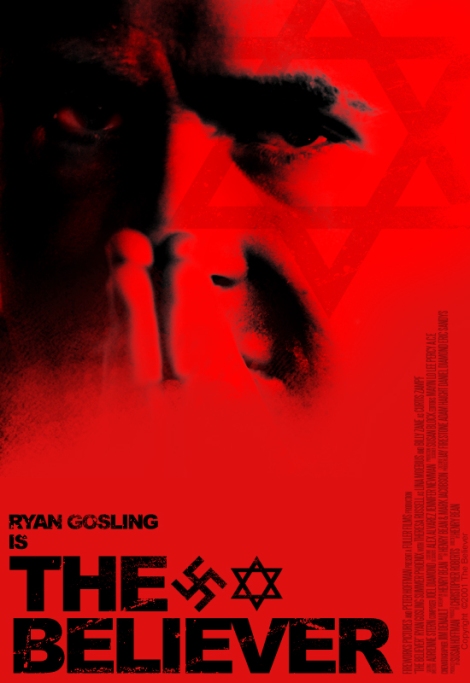 A young Jewish man develops a fiercely anti-Semitic philosophy. Based on the factual story of a K.K.K. member in the 1960s who was revealed to be Jewish by a New York Times reporter.

Before The Notebook, Fracture and Half Nelson, Ryan Gosling starred in ‘The Believer’ as Jewish Nazi, Danny Balint. A young, impressionable man with a past he wants to hide and a future he wants to cement. It is a frighteningly believable performance by Gosling, he acts with such intensity and purpose that when he descends into one of his anti-Semitic rants you at times forget you are watching a film. He portrays the extraordinary extremist views found quite often in Louis Theroux type documentaries, with the key differentiator being that Goslings character, based off a real person, is actually a highly intelligent, articulate person.

Aside from the excellent performance from Gosling, the plot itself is significantly underdeveloped. We do not really understand why he is a Nazi, why the girl he likes is infatuated with him or what the consequences are for certain actions he takes. There are many plot holes, many pieces of the puzzle left unexplained, but if you can overlook those points you are left with a film with enough substance to it for it to be suitably compared to the likes of American History X. Comparisons to it will always happen, considering how closely released they were and how both tackle such sensitive subject matter. But with a smart, sharp script and a performance by Gosling on a parallel with Norton’s in American History X, both are equally worthy of high praise.

If you are not sold on Gosling as an actor, as I know many people are not, then I urge you to watch this film. It is arguably his best performance despite it being one of his earliest. A far cry from the shuffling smirkfest he usually puts out, this film is exceptionally powerful with its only weakness being the unanswered gaps in the story.