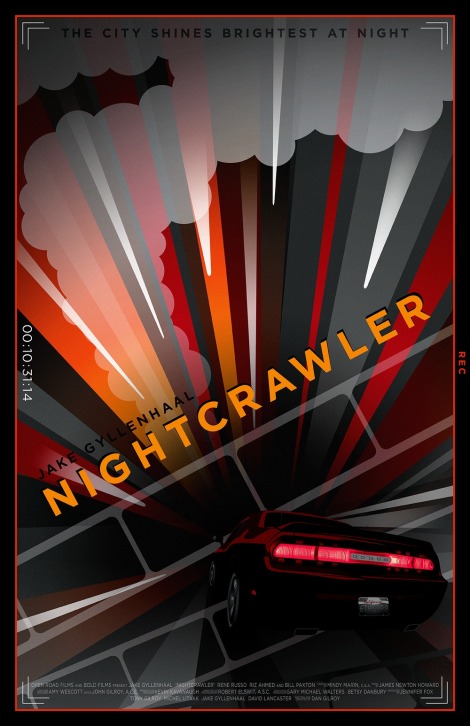 When Lou Bloom, a driven man desperate for work, muscles into the world of L.A. crime journalism, he blurs the line between observer and participant to become the star of his own story. Aiding him in his effort is Nina, a TV-news veteran.

9/10 – What a year Jake Gyllenhaal has had. Prisoners, Enemy and now this, it is a complete turnaround after a few dubious films (Prince of Persia, The Source Code) and with his well documented body transformation for the upcoming ‘Southpaw’ I have no doubt we will be in for further incredible performances next year.

It is dark and tweaky, and Gyllenhaals performance accentuates those qualities that run deep throughout this voyeuristic thriller. Morbidly funny, it’s satirical take on the news and our thirst for it drew comparisons to ‘Network’ in that tragedy thrives, blood sells and it does not matter how we get it. Only that in Network we view it from a corporate perspective from the 1970s, here we see it from an entrepreneurial side, from a frustrated, hostile oddball who will do anything to succeed in modern society. If manipulating and exploiting news to your advantage is what it takes, as many people do, then that’s what we will do.

Shot all at night in brooding downtown LA, it is one of the more creepier thrillers in recent times. It gives you a sense of disorientation and the frantic nature of which Gyllenhaal’s character races about piles on the tension to a intense degree. Riz Ahmed (Four Lions, Ill Manors, Shifty) is brilliant alongside Gyllenhaal as his new assistant, and upon arrival their chemistry injects a new lease of excitement and uncertainty into the film. His timid nature opposite ‘Lou’ and his extremely articulate, precise yet intimidating dialogue makes for intriguing and unsettling viewing.

I think Enemy was arguably his best this year, but that is just my preference based on just how insane it was, but Nightcrawler is still a brilliant film and vastly different by comparison. The main constant here is Jake Gyllenhaal and his repeatedly great performances, and if you enjoyed Prisoners, Zodiac and Enemy, then this fill will float your boat. He is an absolutely abhorrent sociopath and it is a lot of fun to watch.

Note: Reviews will be shorter until the backlog of reviews are cleared up.