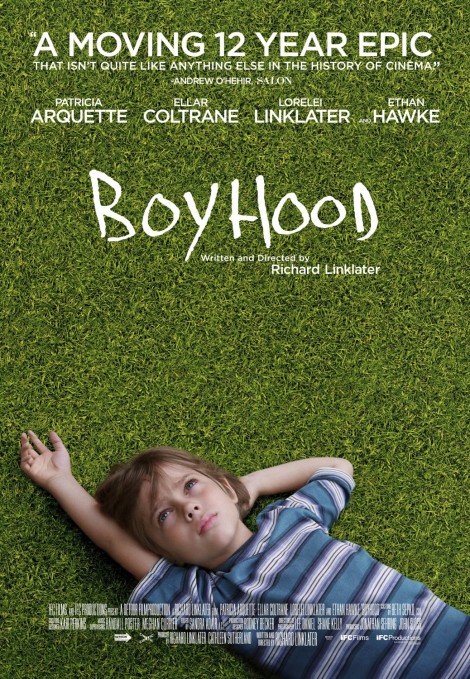 7/10 – Unless you have been living under a rock, you will have heard of and quite possibly seen Richard Linklaters’ ‘Boyhood’. A piece of cinema that will no doubt go down in history as one of the ‘greatest’ cinematic achievements made due to the fact it was actually filmed over 12 years and Mason (Ellar Coltrane) literally grows up in front of your eyes from scene to scene.

It was always going to be a challenge bringing all the footage together, and I loved the introductions of new technologies, political events and popular culture to give an indication of what year we had jumped to. It did seem a bit obvious, but I favoured it over a classic ‘2 years later…‘ text splashed on the screen. It was obvious that these kids were ageing, but by comparison to standard text prompts, Linklaters’ methods were subtle.

Given the buzz of this film, looking at the posters, the reviews, the way that everyone has been harping on about how simply incredible Boyhood was, I must admit, I felt a little let down. It wasn’t the near 3 hour running time that was frustrating, nor was it that it attempt to cram in almost every teenage movie cliche going for it. I just expected more from it, but I’ll elaborate on that further down.

When you do cover 3 hours and go after most of the teenage cliches, you are going to find pieces of the film, if not the entire film relatable. From the pressures at home, to relationships, to the younger sisters, to school life and how all of that feeds into the building of you as a person – it is all relatable to some extent. Certain aspects will be more relatable than others, but what the film does is prompt you to remember your ‘boyhood’, and that is where it stops, because once you have remembered there is nothing more the film gives you. Nothing new, just a jolt in the mind to remember when something vaguely similar might have happened to you.

This is where my expectations have hindered my opinion on the film. I expected more. More conflict, more emotion, just something a bit more significant to happen than just ‘remember when this could have happened to you?’. The script was realistic, effortless and natural. The conflict that did happen was pretty significant, and it was charged with emotion, but it was short lived. The acting was pretty good too, difficult to fault considering Ellar Coltrane was initially untrained and Linklater used his own daughter, but all of that was not enough to keep me fully interested and invested for 3 hours. I get that to inject any of what I am asking into the film, it would have changed the entire films dynamic. It would have made it unrealistic, sensationalist and completely miss the mark on what Boyhood has set out to achieve, and that’s a realistic, simple portrayal of one boy growing up. It achieved that, no doubt about it, but I found the films technical successes far outweighed the films success in terms of storyline and content, and as a result it was highly watchable but ultimately a little bit dull.

Definitely another film I will be adding to my list to watch again next year. Perhaps with readjusted expectations I will be able to appreciate it more, but we will see.